Chapter 12
Chitose Kasadera (笠寺千歳; Kasadera Chitose) is a minor character in Short Cake Cake. He is the older brother of Chiaki.

Chitose, according to Ten and Ageha, is a handsome young man. He's first seen with straight hair that reaches the nape of his neck with fringe that frames his face and also falls down the middle of his face. The back part of his hair is tucked behind his ears.

The color of his hair appears to be on the lighter side of the spectrum, it's possibly pink or some kind of red hue.

Later on in the manga, in chapter 54, we see him with a similar hairstyle to his first one, though his bangs are swept off to the left side of his face. The ends of his hair seem to curve and make his hair appear a bit curly.

Chitose is an overprotective brother and he's often seen adoring his younger brother Chiaki and calling him cute. 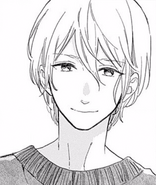 Chitose in a panel from chapter 12 of the manga.
Community content is available under CC-BY-SA unless otherwise noted.
Advertisement